The award recognizes a distinguished record of outstanding service, achievements, and contributions. 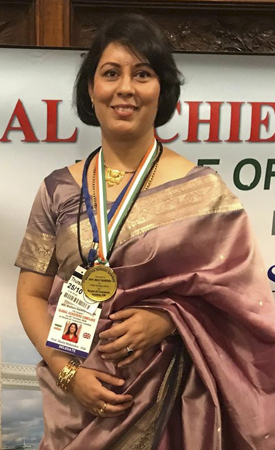 Mahendra at the ceremony, shortly after receiving the award.

Shaily Mahendra, an Associate Professor of Civil and Environmental Engineering and a Samueli Fellow, has received the 2018 Mahatma Gandhi Pravasi Samman award from the Government of India Non-Resident Indian Welfare Society. The prestigious international award recognizes Indians living outside the country who have a distinguished record of outstanding service, achievements, and contributions. The honor is given to only about 30 people per year out of more than 16 million Indians living abroad. Prof. Mahendra received the award on Oct. 25, 2018 at a formal ceremony at the House of Commons in London, UK.

Mahendra’s research interests are in microbial processes in natural and engineered systems, applications of molecular and isotopic tools in environmental microbiology, environmental implications and applications of nanomaterials, and biotransformation of emerging water contaminants. Applications from this research include the sustainable treatment of drinking water, groundwater, industrial and municipal wastewater, and recycled and reclaimed water.